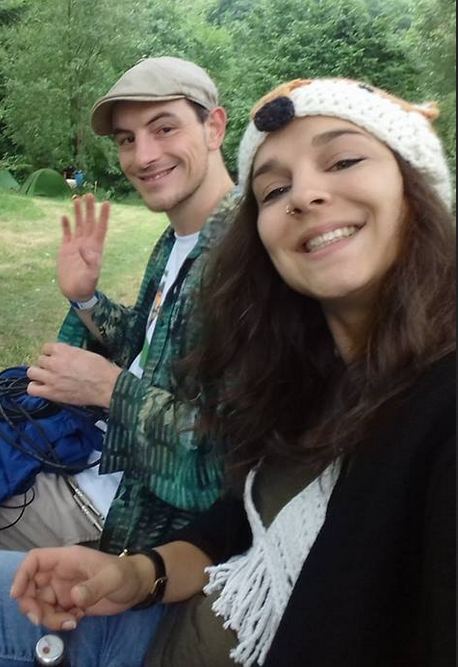 Relephant Features (former: Kati & brudertaktiker) is a singer/songwriter and artist duo from Rheinberg, Germany. Their songs in English, German and other language are mostly based on jams, improvisations and everyday intuition. It’s honest and crispy music for people with a soul who do not want to be afraid of being afraid.

The duo’s musical influences are rich and various: Kati’s singing derives from Pop, Soul, Jazz and the like, while brudertaktiker’s roots are buried in the HipHop culture and nourish from humorous Anti-Folk and Anti-Pop ideas to Funk Rock, Ethno-Electronica and Experimental Avantgarde icons.

Kati and brudertaktiker have joined forces since jamming together at Rheinberg based ZUSAMMEN/KUNST! festival in 2016. It took them a year to develop a joint musical language, but since the potion is brewed, the magick unfolds. And when finally Relephant Features was born, things went wham. Join their journey!

Nocebo is a lo-fi folk jazz song by brudertaktiker.

The song Simba is a story jam about a young lion who decides to leave the jungle in order to see the world. On his ways, Simba has different improvized andventures and nobody knows what’s gonna happen next. His spontanious journey is accompanied by equally spontanious background vocals and a chorus chant that no crowd can resist.

Dopesong is a jam ballad that came to life during a session at brudertaktiker’s in the early days of the band. The two liked it so much that they reproduced it on several occasions – each version being a jam on its own, loosely based on the original. It’s a song about hope, smoke, friendship and music.

The song Savanna is based on lyrics and melodies that reflect Kati’s encounters with two lovely people in South Africa: Zulu boy Lucky and Xhosa woman Bronwin. brudertaktiker came up with the guitar track during a wine infused jam session on Kati’s balcony. That’s how Savanna was born. The song premiered at moers festival 2018.

The song Peacepaint is based on a guitar lick by brudertaktiker. Some months later, Kati came up with the words and a melody. The song has premiered at moers festival 2018 as seen in the video.